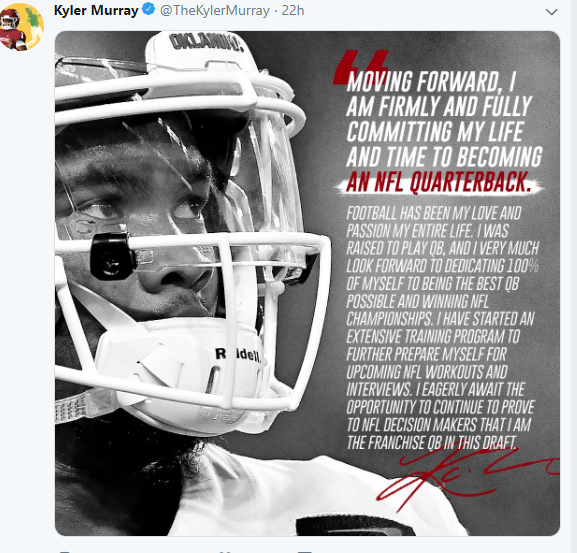 It was this time yesterday, Only much later in the day. I was on my 3rd blunt and was thinking to myself ” Kyler Murray is gonna drop so far in this draft”…. For those that don’t know, Kyler Murray is a 2 sport athlete (Football/Baseball) and has been faced with the decision of signing with MLB after The Oakland Athletics took Kyler with their first pick in last years draft or entering The NFL Draft after a Heisman Winning performance this year playing QB for The University of Oklahoma.

There has been endless speculation as to which sport he was gonna choose and things got really weird on a recent interview with Dan Patrick where he answered ZERO Questions.

And then another week passed and still nobody knew if he was gonna play baseball or football. Until yesterday afternoon when he officially announced he would be putting all his time and energy into playing QB.

I definitely thought he was choosing baseball after that Dan Patrick interview. I just thought he was trying to leverage the speculation into a bigger contract with the A’s……NOPE. And not only was I wrong about that but it appears that I’m also wrong about his draft stock.

Current conspiracy theory: Cardinals told Kyler Murray they'd draft him at No. 1 overall and trade Josh Rosen if he committed to football.

The Cardinals are gonna take him NUMBER 1!!! After they just spent a 1st round pick just LAST year on QB Josh Rosen. Yikes.

Kyler Murray has reportedly hired Erik Burkhardt as his agent.

If Kyler does go Number 1, He needs to think his former teammate Baker Mayfield. Zero chance this would even be a possibility if Baker hadn’t shown out this year.