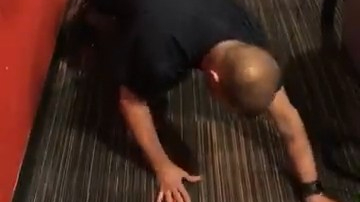 Well, I wanted to blog about this during my lunch break at work and not this evening, but I did not have much time to do so, unfortunately.   Do I hate my boss?  Nah.  But there was a lot of people who called into “The Billy Madison Show” this morning that did!

So during the 9am CST hour, Nard was the peoples’ voodoo doll and Derek was the  enforcer for the people.  Billy was taking calls from people who hated their boss and there were some good ones.  Nard got some very “good ones” too from Derek.  So good, that Nard could not take any more of being a “voodoo doll” and literally said, “I’d rather be a sex doll than a voodoo doll!”  Yes, those words came out of Nard’s mouth!  Well if I was to really quote the exact noises and words Nard said, it would be more like, “kdafkasfasdljkfanlcfajksdhfjahdsfh sex sdkfhal doll!!!!”

What happened next has to be one of the funniest bits the guys have ever done.  At least top 5.  Dry humping is what Nard wanted.  So like a bawse, Derek delivered and treated Nard like a sex doll after a caller called in hating their boss.

Then Derek to proceed to manhandle the sex doll Nard!

When it was all done, Nard got more than he wanted, or maybe he did not get enough?

Just like a one night stand, it was over in an instant.  Derek bringing his “A” game.  Nard bringing his “B”utt game.  It is a have to see bit people!  You can check out the video of the full Nard Voodoo Doll bit on the Billy Madison Show Facebook page.  Go ahead and give the page a like too if you have not, it won’t hurt.  Or you can check out the bit by clicking here, you can still like the page there too, don’t be shy.