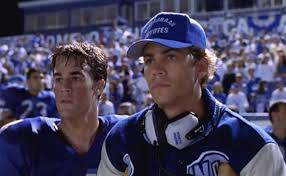 On this date in 1999, backup Jonathan "Mox" Moxon stepped into the West Canaan football spotlight when "Varsity Blues" was released in theaters. pic.twitter.com/KvTt0kbUo4

Can’t believe it’s only been 19 years since Varsity Blues was released. This movie feels at least 30 years old but regardless it’s a classic and made me think about what are the best football movies of all time. Here are mine….

Movie Breakdown-  Spike was using steroids, John Madden has the worst driver of all time, Becky made an ugly girl but she had a badass go cart and The Annexiation of Puerto Rico would have got blown the fuck up. Those Cowboys jerseys were money and I loved seeing Al Bundy (Heisman Winner) pick on that guy who shrunk the kids (Dork). Just a classic movie with a solid moral message- If your wife leaves you, Turn your daughter into your son. Love it.

Movie Breakdown- This movie was pretty heavy but the football scenes were top notch. I hate that Boobie got hurt and then that doctor from Midland clearly tried to screw him over. Loved the girl that questioned starting QB Mike Wenchell on if he was gay or not and then made him have sex with her in the bathroom to prove it. I always thought this is how High School parties would go but apparently you also need to be the starting QB. Don’t get me wrong, I’ve had plenty of girls question my sexuality, Just none that then asked me to prove it afterwards.

Wanna win? Put Boobie in! Let’s be honest though, Even with Boobie Miles, Dallas Carter was gonna kick the shit out of the Mojo and Tim McGraw acted like a real asshole when he threw his state title ring out the window.  This movie had it all, Including a heart breaking ending, But that’s football. Some times shit doesn’t work out. 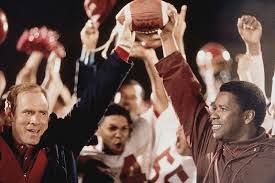 Movie Breakdown- This movie is #1 on a lot of people lists and that’s honestly a fair ranking. I could watch this movie over and over even though it felt like they only ran one play the entire game.  I also remember when I first watched this movie as a kid and hating white people for a solid 3 months when they threw a brick threw Coach Boone’s front window. That was some bullshit.

I Thought it was cool to see Coach Yoast (White Coach) bow down to Coach Boone (Not White Coach) and in the end when he chewed those refs ass for being racist and threatened to go to the press, Gives me the chills every time. Also shutout to Sunshine for kissing Gerry, Thought that was a ballsy move and I’m not sure how that fit into everything but whatever, It was hilarious either way.

Movie Breakdown- “My name is Willie, Willie Beamin” what a fucking movie this was. The Sharks with Al Pacino as your head coach and Cameron Diaz playing a complete bitch of an owner. I love how Lawrence Taylor was in this movie as well and played a pretty big role. When LT cut Willie’s yellow SUV in half out in front of that party. OMG. This movie was so close to being Number 1 for me. I just thought having Al Pacino pay for sex was a little un realistic but other than that this will always be in my DVD collection even though people don’t have DVD collections anymore.

Movie Breakdown- I don’t know how many people remember The Program but if you’ve never seen it, Make sure you change that asap. ESU is the back drop for this classic. It has actual steroid use, A failed Heisman run, Major injuries, Sex assault (Not Good), and a Head Coach desperate to save his job. This movie is high drama and has one of the greatest QB quotes of all time and is the main reason I put this movie #1 in my heart

Email your complaints to this top 5 list to nardsucks@billymadisonshow.com because that’s Nard’s email and he can’t read.